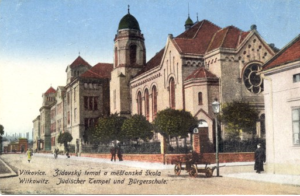 A scroll is like a person – it has a past, a present and a future. Our Czech scroll was written about one hundred and fifty years ago and comes from the town of Ostrova in the province of Moravia. It is a survivor of the Holocaust and like many survivors it bears a number MST#1490.

Jews have lived in Ostrova for six hundred years, with the first record dating from 1508, although a formal community only existed from 1875. Ostrova grew from a small market town into the third largest city in Czechoslovakia, partly thanks to the Jewish population of 10,000 who resided there prior to the Shoah. Of those deported during the Holocaust, only 253 survived.  There may be a few Jews living there now but there is no community as such.

During the war, 1,564 Torah scrolls from the ravaged communities in Bohemia and Moravia were saved by the Prague Jewish community, which itself largely perished. The scrolls were stored in the Prague Jewish Museum and eventually were sold by the Communist government in 1964 to Ralph Yablon a philanthropist, who donated them Westminster Synagogue. Subsequently the Memorial Scrolls Trust an independent Charity was set-up to be responsible for them.

The Memorial Scrolls Trust is dedicated to the preservation and sharing of these Czech Torah Scrolls. One tenth of the collection is currently on display in the Czech Scrolls Museum located at Kent House in Knightsbridge. The rest have been lent to communities across the globe, giving the scrolls a second life as the focus for new generations, through ritual use, education and interfaith work.

Cockfosters & N Southgate had two Czech Sifrei Torah allocated on permanent loan from the Memorial Scrolls Trust. The main condition of loan is that the scrolls are actually used within the community and so one has been returned. The other, MST#1490, takes a proud place in our services at many Yom Tovim, providing a tangible and moving reminder of the shared history and legacy of our people.